By Michael News Sep 30, 2019 No Comments on Choice Properties Showcases Big Plans for the Danforth

The area around the Woodbine Subway Station has largely escaped attention from condominium developers as they focused their efforts on locations closer to the city center. But choice lots in downtown, midtown and to the immediate east and west are becoming harder to find these days.

As a result, enterprising developers are shifting their glance a bit further afield to places like the Danforth. 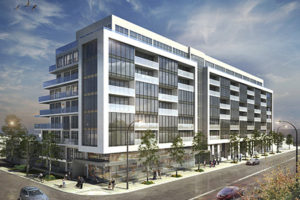 Such is the case with Choice Properties REIT. The company, a subsidiary of Loblaws, has announced their intention to transform their 985 Woodbine location (which currently hosts a Valu-Mart) into a residential mid-rise development consisting of two buildings that will rise 8 and 14 stories.

The Valu-Mart will be torn down to make way for the new project, which will then wrap around the back of existing buildings on the corner of Woodbine and Danforth Ave.

The buildings, designed by renowned architects Turner Fleischer Architects, are envisioned as a mixed-use project with a limited amount of retail at street level.

According to renders recently revealed by Choice, the taller of the proposed towers will step back incrementally in order to minimize the impact of shadows at street level and to alleviate concerns that its massing would be inappropriate for what is essentially a low-rise neighborhood.

The proposal calls for a total of 402 units with more than half being one-bedroom units and 14 of the remaining units having three bedrooms.

In addition, the proposed demolition is to eliminate 14 rental units currently active onsite. As such, and as per the City’s Rental Replacement Policy, 14 units of approximately the same size in the new buildings will be offered for rent. Also, six 2 story town houses will be constructed facing the street.

To address resident concerns about the loss of the grocery store, a large 2,098 square meter retail space in the new development will be set aside for the relocated Valu-Mart.

The development team have also given assurances that access to and use of the Woodbine subway station will not in any way be impeded during construction. 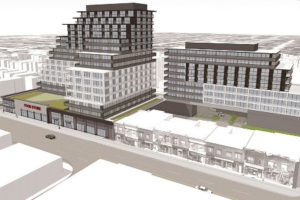 The project is currently list as “pre-construction.” Otherwise known as the “paperwork stage.”

The rezoning application is still wending its way through City Hall, and no official start or completion dates have announced.

In addition, the renders that have been revealed are subject to change, as is the scale of the project.

The area is ripe for redevelopment, the scale of the project is suitably modest, and neither the existing supermarket nor available rental units will be lost by the community. Exactly when construction will actually commence though remains up in the air as of this writing.

985 Woodbine no doubt represents only the first of what is sure to be a wave of new developments in the Danforth. A phenomenon that is sure to pick up speed as the last of the prime mid-sized lots closer to downtown are built out.